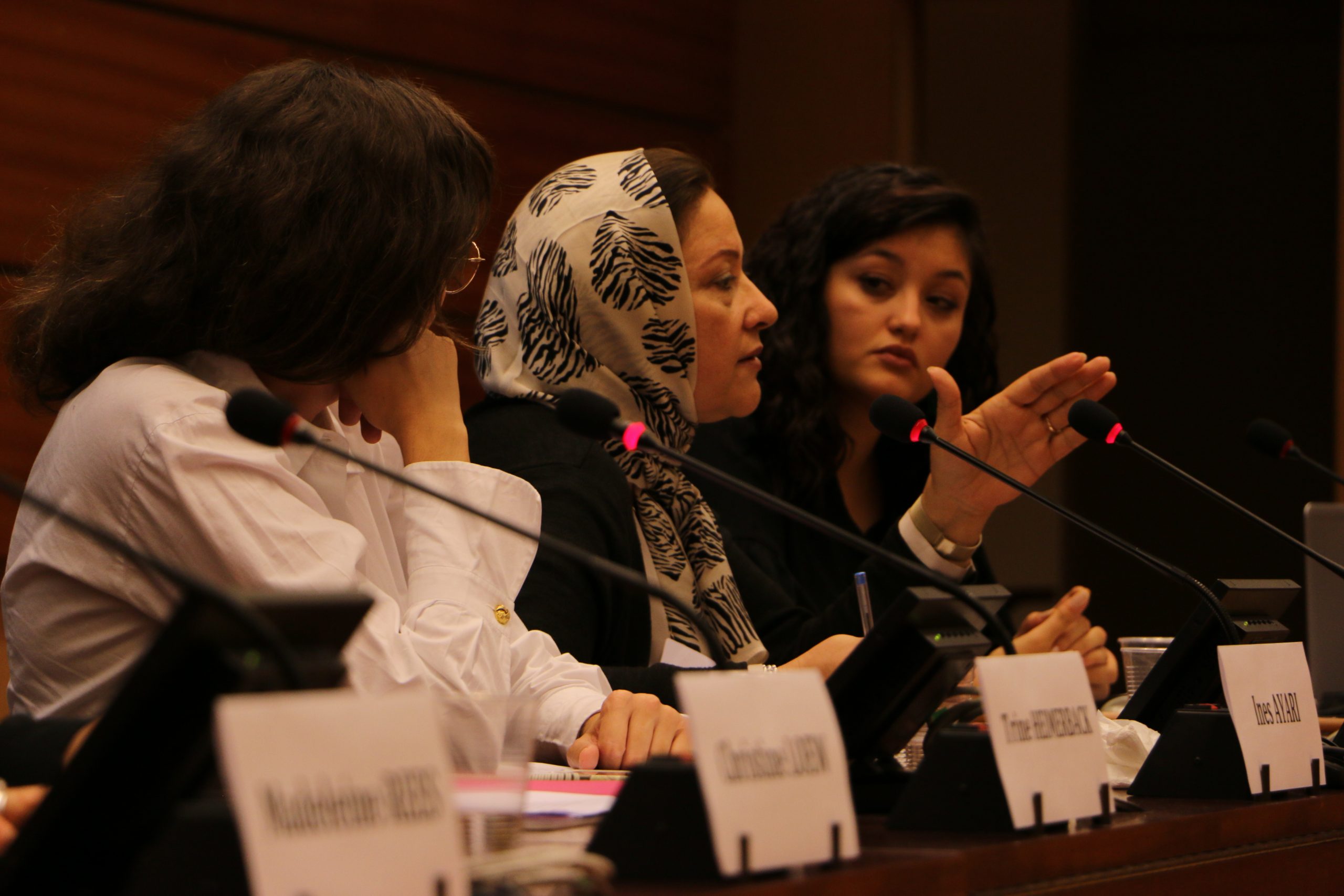 “Even if women are not part of the fights in Libya, we should be part of the solution,” was the clear message from WILPF’s partners Dr Rida Al-Tubuly and Aisha Al-Tubuly during the side event ‘You are missing the full picture,’ which took place on 25 September 2018.

The joint side event gathered diplomats, activists and NGO representatives at the Human Rights Council to listen to first-hand accounts from Libyan women activists, who highlighted how their recommendations far too often are missing from the discussions on getting peace in the country.

The deliberate exclusion of women from civic and public spaces in Libya has led to a significant lack of narrative and input from grassroots women. This results in an incomplete analysis of both the root causes of the conflicts and the peace and security concerns.

Dr Rida Al-Tubuly, President, and Aisha Al-Tubuly, Co-Leader Coordinator, of Together We Build It (In Arabic: منظمة معاً نبنيها), had travelled to Geneva to speak about the challenges Libyan women face working for peace while trying to juggle patriarchal restriction and conflict-related issues in their country. Their presentation drew attention to the gap between the support provided by the international community to women activists to become influential peace actors, and the lack of real opportunities provided to them to utilise these capacities in formal peace initiatives.

“During the past seven years, the international community – UNSMIL and UN member states – has been the main leading actor for the political and peace building process in Libya. However, all the important high level meetings initiated, mediated and facilitated by the UNSMIL or member states barely has included women,” said Dr Rida Al-Tubuly.

Drawing on their own experience, Dr Rida Al-Tubuly and Aisha Al-Tubuly illustrated how women in Libya today face numerous challenges, ranging from cultural norms and gendered stereotypes to restriction of movement, and from ideological and religious challenges to serious security issues.https://www.youtube.com/embed/7cqot3sC5tk?controls=1&rel=0&playsinline=0&modestbranding=0&autoplay=0&enablejsapi=1&origin=https%3A%2F%2Fwww.wilpf.org&widgetid=1

Since 2011, Libyan women activists have been working on initiatives to promote and support peace and security on the ground and have led a number of disarmament and peace initiatives. However, the scope of their actions to meaningfully influence the peace process in their country is still limited. Libyan women have been widely excluded from the political arena despite international stakeholders having repeatedly emphasised the importance of their participation.

On this aspect, Dr Rida Al-Tubuly said that “the international community showed a very gender-blind approach to the right of Libyan women to meaningfully participating in peace process,” emphasising that this has negatively impacted women on the ground. As a result, the lack of political will of the international community “sends an explicit message to Libyan decision-makers that women’s participation in decision making and peace process is not necessary and not important.”

Campaign Release: You are Missing the Full Picture

In order to raise awareness about the exclusion of Libyan women from the political arena, Together We Build It launched their new campaign during the side event. The campaign is called ‘You are missing the full picture.’

The campaign illustrates a number of meetings concerning Libya’s future from which women were excluded. One examples of such a meeting is the International Conference on Libya that took place in Paris on 29 May 2018. As illustrated in pictures from news outlets not a single Libyan woman was invited to participate. Another recent example is when the UN mission to Libya mediated a meeting in Libya to agree on a ceasefire in the light of the horrific events in Tripoli, and yet, once again not a single woman was present.

During the Q&A session, the two Libyan delegates engaged with the audience by replying to a number of questions, including one from a Libyan civil society organisation representative asking whether the exclusion of women could be due to social factors.

Dr. Rida Al-Tubuly replied that the issue is not about society being against women in politics, because “in 2012 we had elections and there were women, putting their photos on posters in the streets together with fathers, brothers and sons supporting them.” She explained that the issue is rather related to the fact that “when the Libyan society is run by a stable government women’s participation is made possible, but this condition is not in place in Libya, especially since militias are fighting in Tripoli.”

To highlight this issue Dr. Rida Al-Tubuly described her trip from Tripoli to Geneva, demonstrating how difficult even participating in this side event in Geneva had been. As the airport in Tripoli was closed, she had been forced to drive for three hours at night to Misrata, leaving her home at 4:30 a.m. She had to pass multiple checkpoints without knowing what would meet her. “I was risking the lives of my husband and son, who had to go with me as guards in the taxi. We did not know what dangers we could find along the road. This is not a normal situation.”

The side event followed a written submission presented to the HRC39 and an oral submission read out by Dr Rida Al-Tubuly.

Dr. Rida Al-Tubuly and Aisha Al-Tubuly will continue campaigning for the inclusion of Libyan women in the peace process. Read more about their campaign on the website of Together We Build It.

You can also read more about WILPF’s partnership with WILPF and our upcoming activities on the project page: Towards a Lasting Peace in Libya.

The side event was hosted by WILPF in partnership with Together We Build It and co-sponsored by The Permanent Mission of Norway to the United Nations and UN Women.

Together We Build It Joins The UNOY Family!